A little hobby update: All about the base

I'm trying to get back into the habit of regular posting... I have actually been working on a lot of little projects recently, but mostly stuff that isn't that interesting to look at (in my opinion). However, I shall do my duty and keep you in the loop!

A project that I've been meaning to do (but not really wanting to do) for some time is the rebasing of my 20 flesh hounds. When I made them originally, there weren't any 40k bases supplied with them, so I went with what I thought was best (40mm round, like all other "Beast" type units). Now that the Khorne Daemonkin codex has come out, GW have finally started supplying flesh hounds with 40k bases. Unfortunately for me, they're the newer 50mm rounds. Of course, there is no rule saying that I have to rebase anything, but I'm a weird obsessive type so I knew that, sooner or later, I would. So I bit the bullet and went ahead with it.

I didn't relish the thought of ripping apart my lovely models however, so I looked for other solutions. Thankfully Secret Weapon Miniatures make some very handy "hollow blanks" for just this sort of thing. I picked a bunch up and got to work: 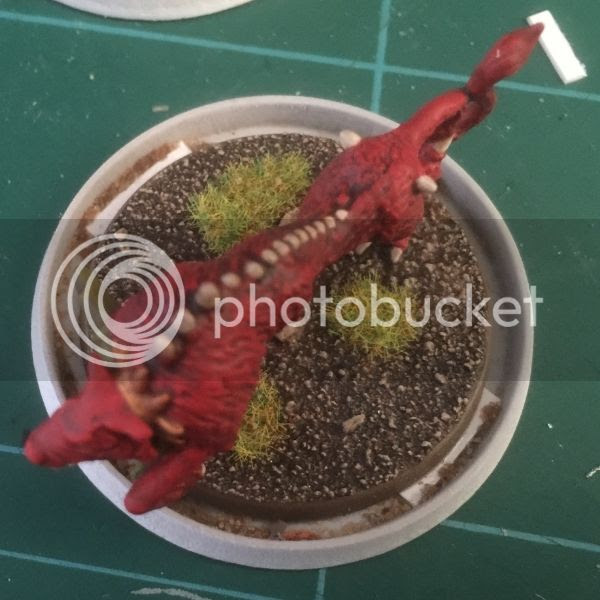 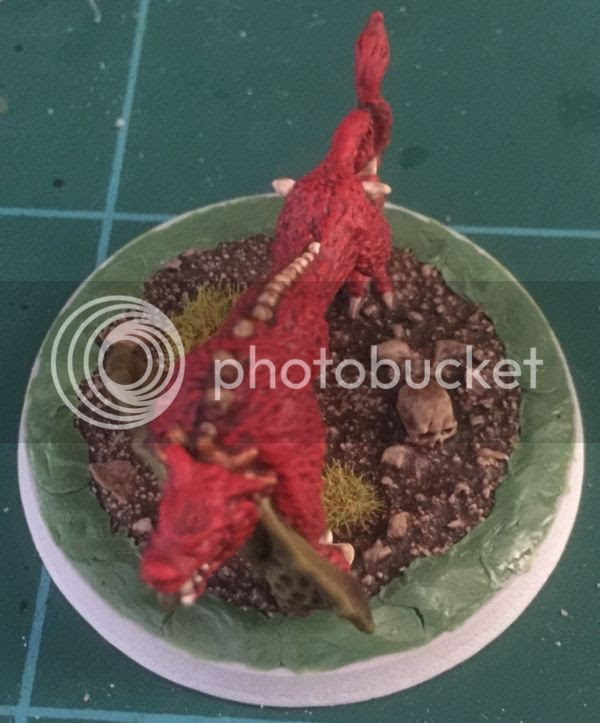 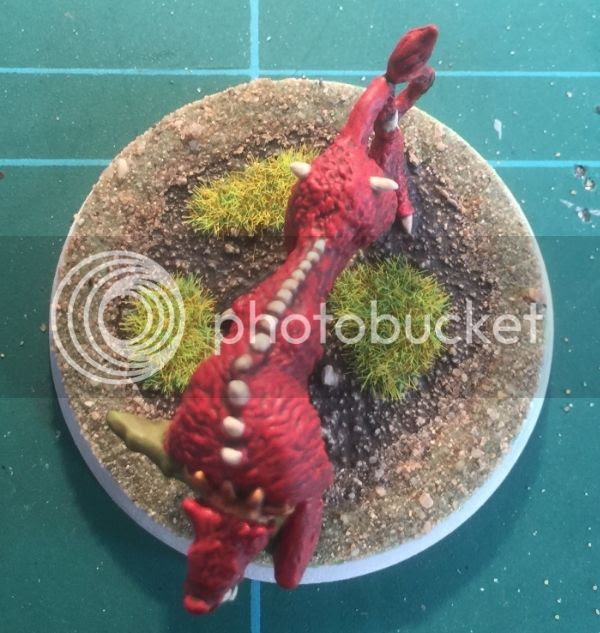 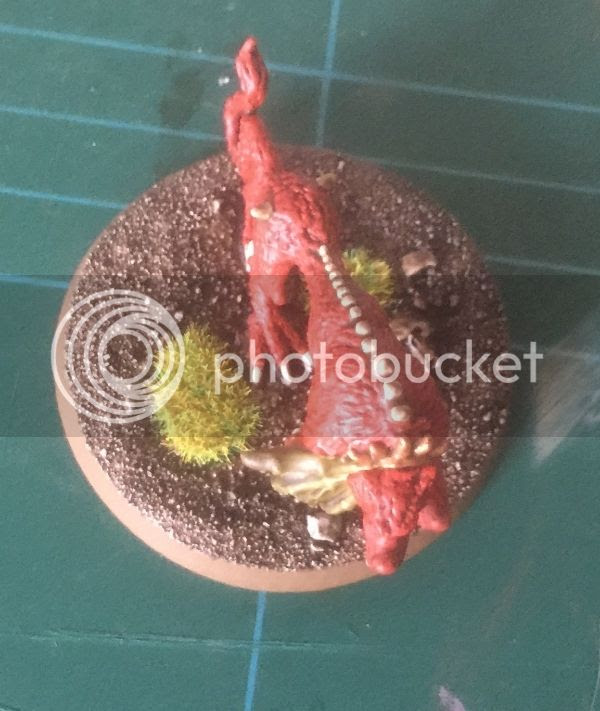 It was actually very simple to do. I glued the old base inside the new base, filled the gap with green stuff and covered with sand, then painted. The only tricky bit was getting the new sand with blend with the old, which I think went well for the most part.

I know there isn't much to see, but comments are welcome! More interesting stuff coming soon, I promise ;)
Posted by Ross at 11:49 6 comments:

Email ThisBlogThis!Share to TwitterShare to FacebookShare to Pinterest
Labels: 40k, Daemons, Khorne, Khorne Daemonkin, The Scions of Skalathrax, The Stormbringers

Sabotage at the Sump...

Well, it's been roughly a bajillion years since I last posted anything, and for that I offer my humblest apologies! Hopefully this post will make it up to you though...

So a short while ago, my good buddy Alex roped me into a game of Rogue Trader (by which I mean, he asked me once and I was immediately all over the idea). Last Monday, we made this happen.

Before I start, Alex has already done a little write up of our battle, which I highly recommend you check out.

As this was to be my first ever game of RT, and Alex's first game in many years, we decided to keep things fairly small and simple. We each picked a handful of models, and got cracking.

The premise for our little scenario is that my cultists are attempting to poison the water supply (actually a chemical processing plant in our case), spreading chaos and disorder among the residents, while Alex's company of pirates have been charged with protecting it. This wont be a full report as such, but more a series of action shots from our game, and a few words to go with them. Hope you enjoy. 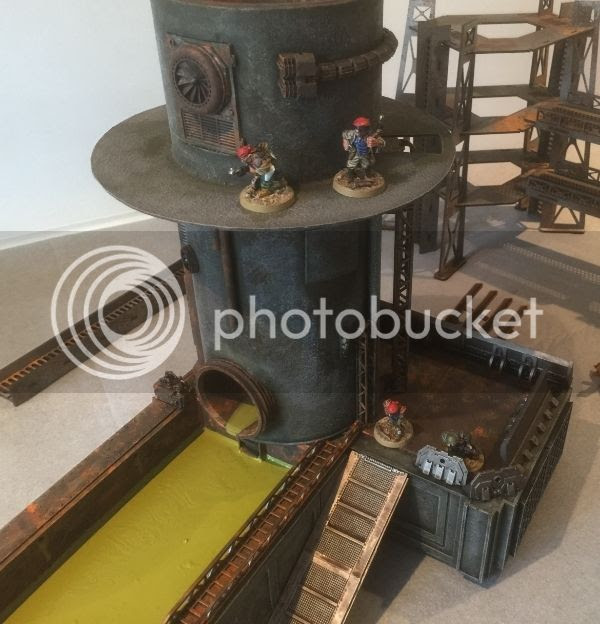 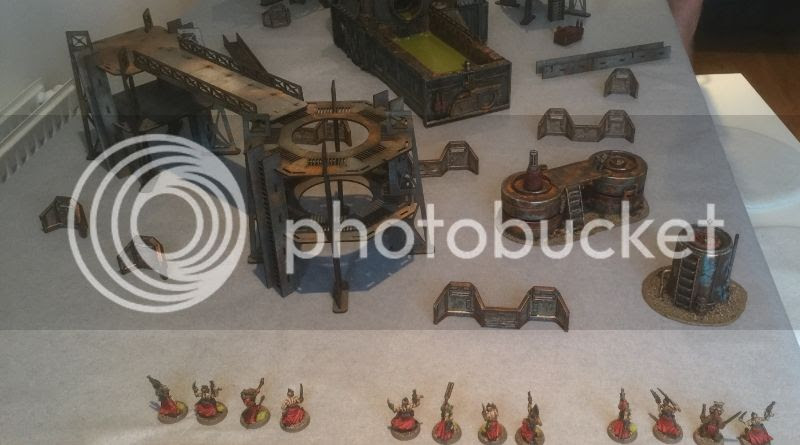 My cultists started advancing towards the processing plant, while four shifty looking pirates stood guard. As this was my first game, we weren't exactly familiar with the rules for hiding at this point, so the cult advanced with little care for their own safety... 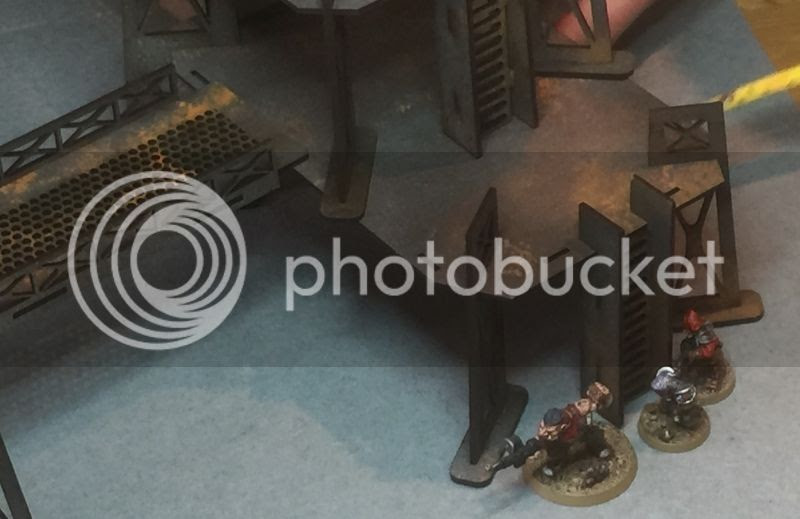 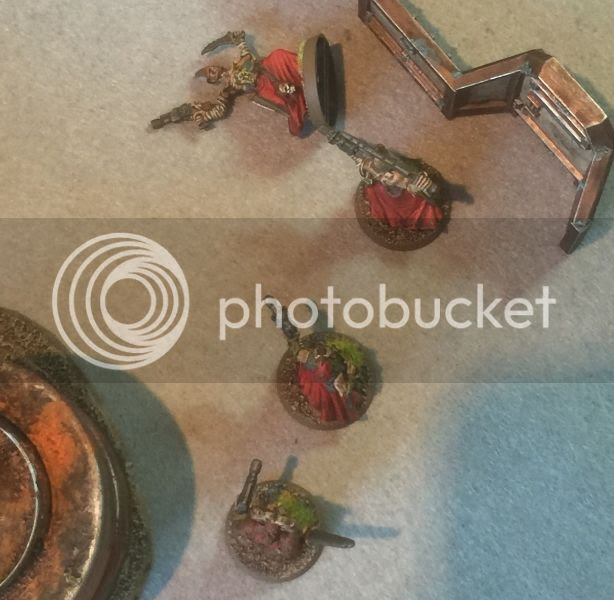 Seeing the blood-crazed cultists hot-footing it towards them, the pirates call for reinforcements. Unfortunately for the cult, the pirates also prove to be crack shots, even at extreme range, and drop several of their number on the way in. 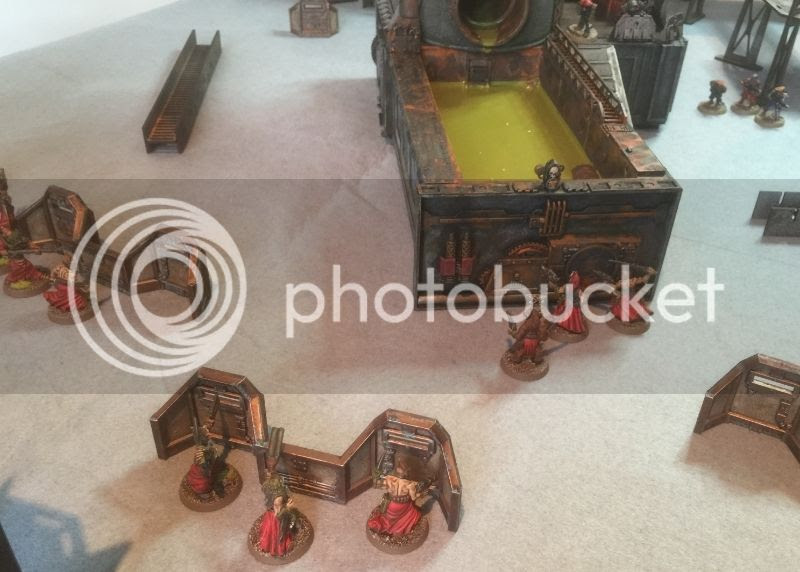 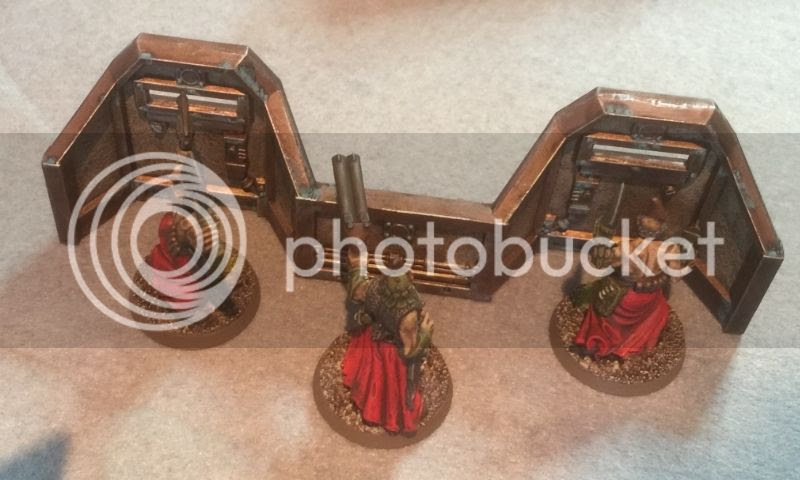 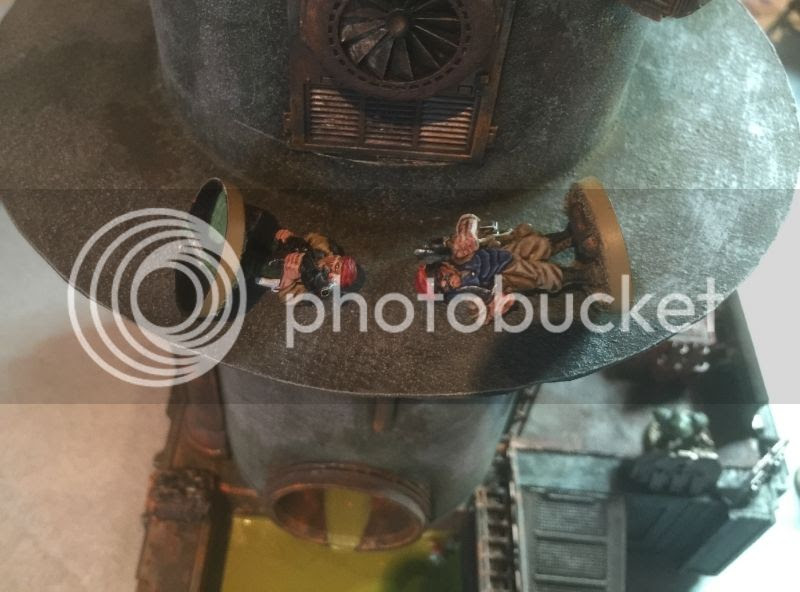 Feeling the heat, the cult decide it may be time to prolong their lives by hugging cover. My cult leader takes position behind a barricade and returns fire (after spending several turns trying to get his shotgun to work). Combined fire from the cult leader and his accompanying mooks manage to drop both the guards at the top of the tower. 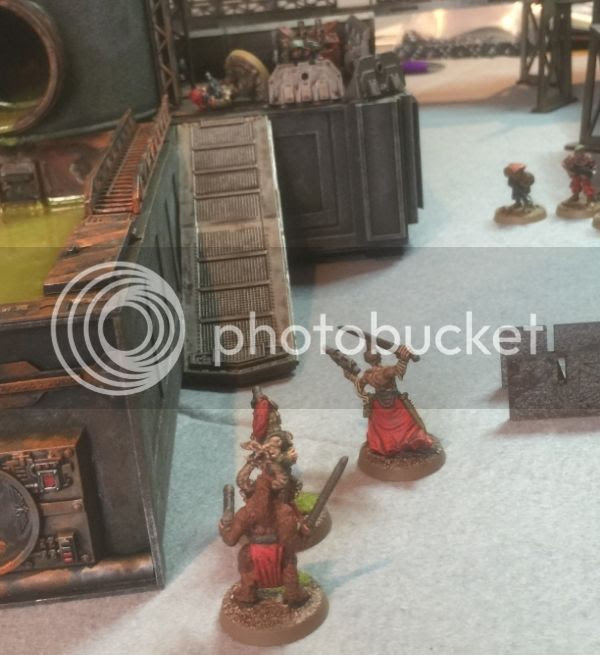 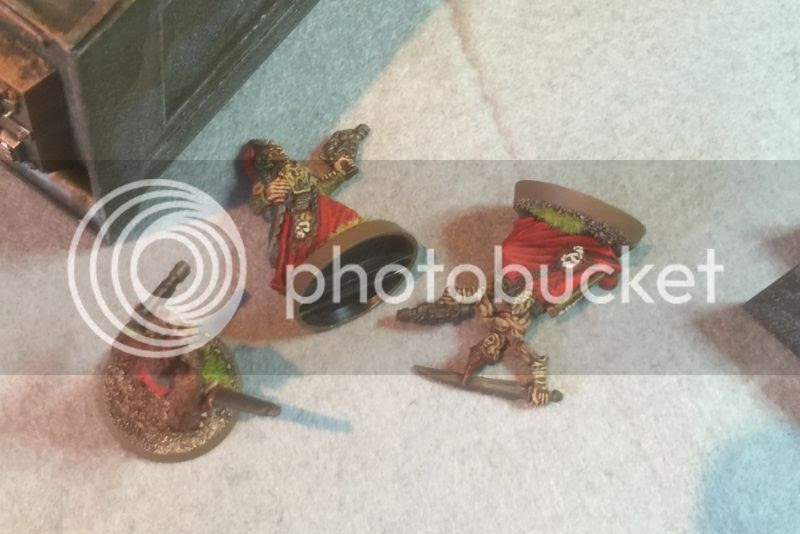 The rest of the cult advance towards the objective, under heavy fire from the better trained and better armed pirates. Several of their number fall to autogun fire, offering their lives to the Blood God, and one of the pirates with them. 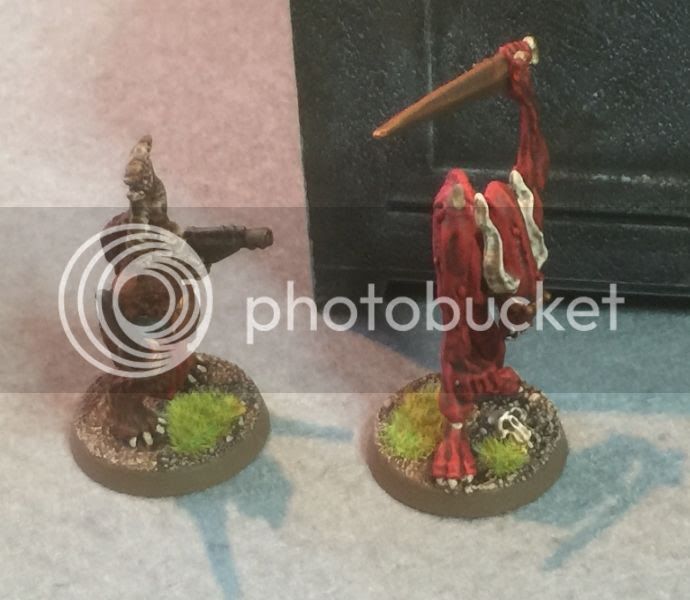 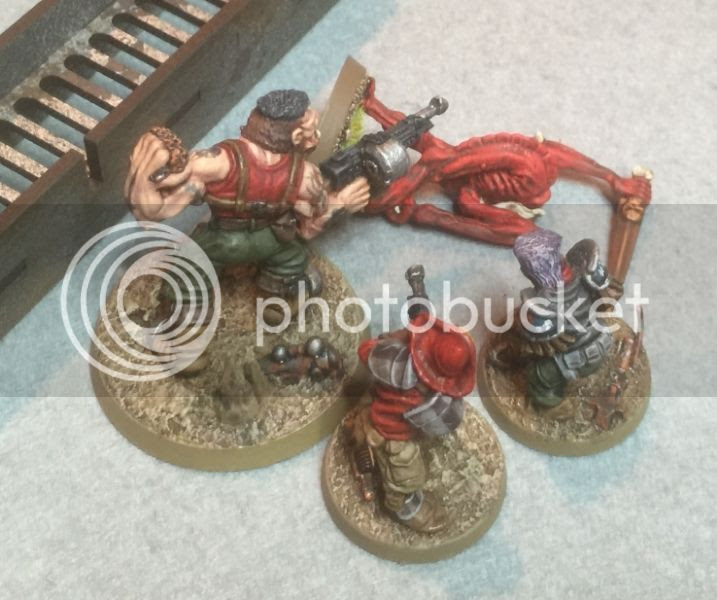 The scene of carnage catches the attention of Khorne, and he blesses his faithful with a bloodthirsty servant to aid them. The pirate boss and his crew seem to be made of sterner stuff however, and send the daemon back to hell. 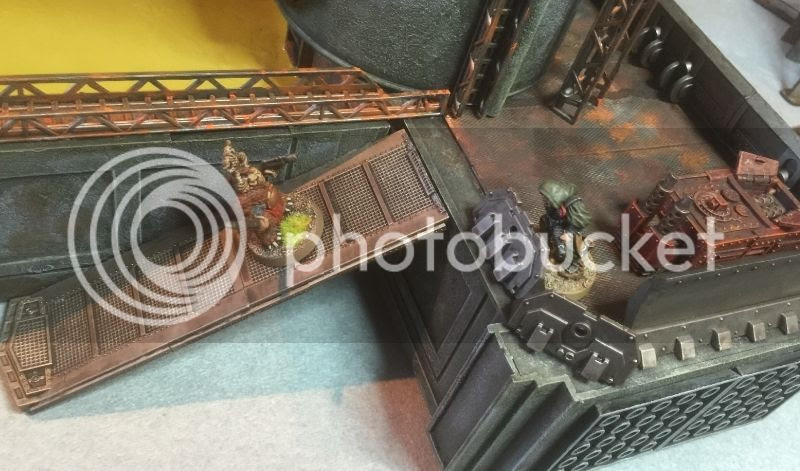 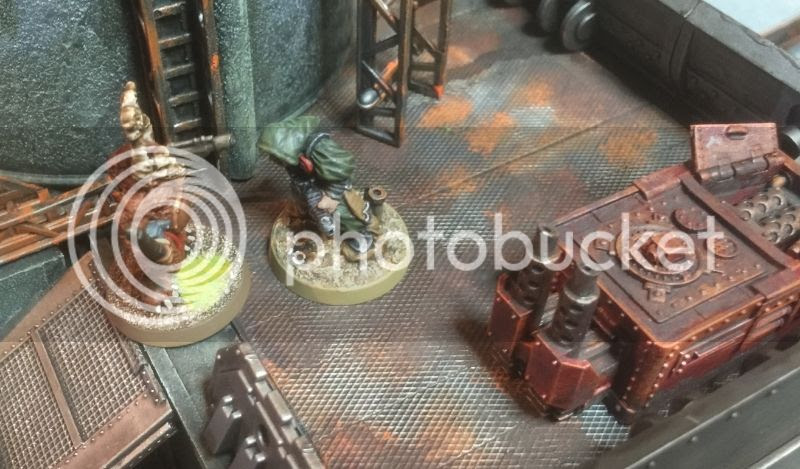 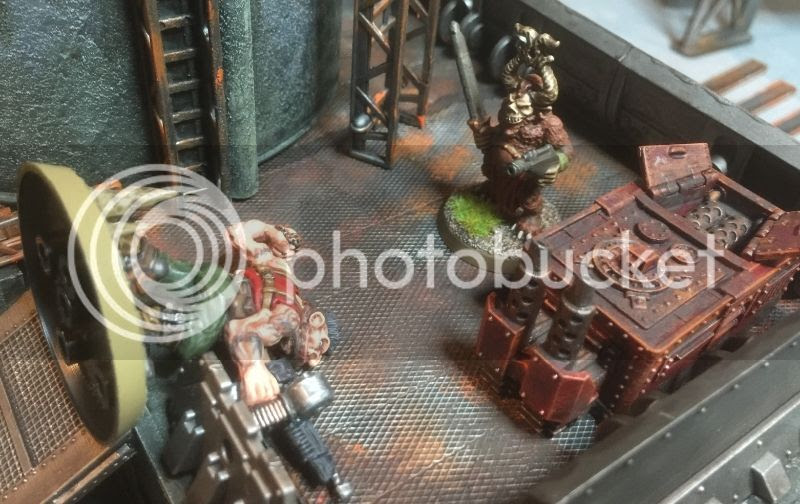 The appearance of the daemon managed to buy time for the cult to advance. Butting a pirate into submission on the way, the beastman makes it to the control panel. After much head-scratching and control panel-bashing, the deed is done and the machine is sabotaged. To add insult to injury, the plucky beastman manages to shoot the Ogryn pirate in the face before the cult retreats.

Well that was mighty fun! I didn't really know what to expect from this game to be quite honest, but what a blast! We spent quite a lot of time flicking back and forth through the big book, and we did wing it a few times, but we were so involved in the story that was unfolding that it didn't detract from the fun.

I've been pretty well sucked into the whole RT shenanigans now, to the point where I'm already planning out a little RT-specific warband (though you'll have to wait for that)...

Hope you enjoyed the run down, comments are welcome!
Posted by Ross at 14:18 7 comments: