Where am I and what am I working on? (Part Two)

Those of you who read my blog will know that I've been a little quiet recently. It's simply because real life keeps giving me grown up things to be getting on with instead of painting my beloved toy soldiers. We're moving house this coming weekend at there's still a million things to do. As you might expect, packing up the flat has put something of a dent in painting and modelling time...

I have managed to get on with a little bit though, just to keep my oar in before we get to the new place and unpack everything.

It's not much to see, but I did snap a pic of what I've been working on over the last week:

Yeh, it's an awful picture, I know. What you can (just about) see there are two squads of Daemonettes (10 a piece), with converted command groups, and a Tzeentch Herald on foot. I was originally going to have these in my army list, but I think I'm going to try summoning them in and see how it goes. Still haven't had a chance to play a game of Seventh Edition, but I intend to rectify that soon.

Not much to go on I know, but comments are welcome!

There's a bit of a trend going on in the Oldhammer community with members posting their favourite miniatures of all time. I thought I'd jump on this bandwagon and post my own list. Now, I'm incredibly fickle so this will probably change in the next day or so...

Some of these minis are painted by me, others are plucked from the Warp (ahem, Google).

In no particular order:


Pink Horror - Squawker
Or more generally, all of the first edition Pink and Blue Horrors. These guys represent everything that is great about the Realm of Chaos era. They ooze character and their cheerful demeanour makes  them at once charming and disturbing. I also love the fact that they're all individually named.

The Chaos Toilet
Well, what is there to say about the Chaos Toilet? It comes from a time where anything was possible for Chaos, no matter how crazy. I guess in some ways it's a good thing that they've reined in the crazy somewhat, but part of me still longs for the silliness of the old days. FYI, this guy is being redrafted into my current Chaos army as a Spawn.

Nurgle Chaos Champion
This was pretty much an impossible choice to narrow down. You may have noticed that I have something of a penchant for classic Chaos models. The Jes Goodwin Champions are all among my all time favourites. I've got a pretty good selection of them right now, but of course the intention is to collect them all. For the purposes of this little exercise, I've picked this guy as my favourite. To be quite honest though, that choice could have gone to any of that range.

Forge World Great Unclean One - Scabieathrax
Something a bit more modern now. I was given this model as a birthday gift from my lovely girlfriend a couple years ago, and it was a delight to paint. The sheer level of detail is incredible, all the way down to the tiny Nurglings tugging at his guts. Gross.

Eldar Revenant Titan
Another Forge World model. I'd love to hate the Revenant Titan, being game-breakingly good as it is. The problem is that the thing is so damn beautiful. I would almost welcome the opportunity to face one of these. Almost.

Ork Meganobz
The original Ork Nobz, specifically the one in the middle. To my mind, this is what Orks are. This is what they were when I started playing, and that way they will stay. I think I like them for the same reasons I like old school Chaos so much, and that is the overall silliness mixed with palpable threat. If I could be arsed to paint that many more models, I'd have an Ork army. But I cant, so I don't.

Chaos Dreadnought
This one was one of the models that drew me to Chaos in the first place. I love the disturbing biomechanical nature of the whole model, and the unsettling skull face. Like an IDIOT, I sold both of these two a while back... I think I might need to rectify that situation.

Escher Juve
Another tricky one to narrow down. Pretty much the whole Necromunda range is pure gold. I picked this Escher Juve as my favourite, mostly because of the expression on her little face. She's so tiny compared to that comparatively gigantic autopistol she's clutching, definitely justifying her BS of 2...

Ork Dakkajet
Another more modern one this time, and another Ork one. I think I rather like the current Ork range. The Dakkajet is just as ramshackle as any Ork vehicle should be, and probably the only 40k flyer that actually looks like a plane.

This post took me bloody ages to write, because that list was a big job to compile. Whatever else you might say about GW, they sure do produce some badass models.

Any choices you agree or disagree with? Let me know!
Posted by Ross at 07:47 6 comments:

Where am I and what am I working on?

I realise I've been a bit quiet of late, and for that I apologise... The missus and I have been sunning ourselves in lovely Fuerteventura for the last couple of weeks (OK, I'm not in the least bit sorry for that). We got back yesterday, bringing slightly more than the allowed limit of tobacco and rum, and in turn making me feel like a real genuine pirate. Between being far from my models and having spotty internet access at best, I've been a little quiet on the blogging front.

Now I'd like to tell you that this will change, but that may be a cruel deception... So I wont. In the next couple of weeks we'll be moving house, into a much bigger place. One of the many upsides to this is that I'll have a spare room to set up a table of my own (huzzah!). One of the (only) downsides is that my desired level of geekery may have to take a backseat to packing and other grown up activities.

All that being said, I thought I'd be a good blogger and keep you all in the loop as to what I'm working on at the moment. It's all unpainted I'm afraid, but it might give you something to look forward to...

So for now, a little update on my current works in progress:

My current goal is to have a "7th edition-friendly" 1000 point list assembled and painted in fairly short order. With that in mind, I've assembled two Tzeentch Heralds on discs (although only one will make the 1000 point list). This will give me the opportunity to play around with the new Malefic Daemonology discipline and try out some summoning.

Bit of a shoddy picture, but you get the idea. Both of these guys are built from classic Tzeentch champions on classic discs. I put them on the large flying bases as this is what the current model is supplied with, and I like to keep all of my classic models "game legal".

Next up are eight Screamers of Tzeentch for them to ride with:

I've developed a bit of a liking for Screamers due to their speed and general utility, but we'll see how they work out. These are all made from the incredibly painful to assemble original metal versions.

I've also got a big blob of Daemonettes in the works. I need 18 for my 1000 points list, 10 of which are currently assembled with the remaining eight still needing cleaning:

These are the original Realm of Chaos Daemonettes, which are still the best by far (with the Juan Diaz versions coming in second). The one with the mohawk and pointing claw will be used as a champion for the unit. I don't quite have the full set yet; I may search out the rest at some point in the future, but for now I'm satisfied with the mix I've got.

Also to come are two Slaanesh-aligned Soul Grinders, but I'm not quite sure what I'm going to do with them yet.

That's all for now; comments / advice / death threats are welcome as always!
Posted by Ross at 09:00 No comments: 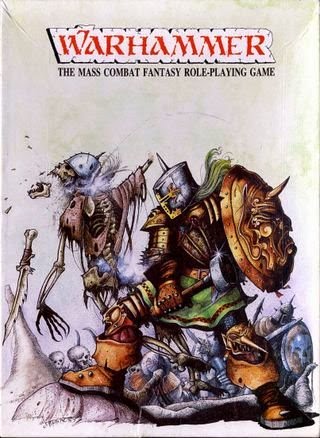 For those of you who don't already know (which amongst my meagre set of readers is probably very few), the Oldhammerers now have a community on Google+. If you haven't joined already, I highly recommend that you do!

Just a quick one to let you know that in my ongoing efforts to become a master of the universe internet and grow my audience, I've created a page on Facebook for this little blog of mine.

The page can be found at https://www.facebook.com/classicchaosdaemons (or just search "Classic Chaos Daemons" on Facebook). I'll be uploading pictures and keeping it updated with my progress, just as I do with my blog. If you use Facebook to any degree, please like my page and tell all your friends (and enemies, provided they're interested in Chaos Daemons).

Email ThisBlogThis!Share to TwitterShare to FacebookShare to Pinterest
Labels: 40k, Daemons, The Stormbringers

Inspiration and my growing library

As I don't have anything to show painting wise right now, I thought I'd share with you some of the unholy tomes that provide me with the majority of my inspiration and drive to paint and collect.

The two in the bottom right of the picture are an absolute goldmine of inspiration, and the true source of my old school chaos obsession. I want to talk about them a bit more in a future post, as they are overflowing with rich background material and beautiful artwork and images. They're fairly hard to get hold of these days too so I'm glad I have the set! For those of you that don't own them, but are interested in the olden times of Games Workshop lore, I can only recommend that you get your grubby hands on them as soon as possible, because they really are magical tomes of wonder.

I'll talk more in a future post about the artwork and background material, but for now I thought this might give you a brief glimpse into the recesses of my obsessed mind...
Posted by Ross at 11:00 No comments: