Where am I and what am I working on?

I realise I've been a bit quiet of late, and for that I apologise... The missus and I have been sunning ourselves in lovely Fuerteventura for the last couple of weeks (OK, I'm not in the least bit sorry for that). We got back yesterday, bringing slightly more than the allowed limit of tobacco and rum, and in turn making me feel like a real genuine pirate. Between being far from my models and having spotty internet access at best, I've been a little quiet on the blogging front.

Now I'd like to tell you that this will change, but that may be a cruel deception... So I wont. In the next couple of weeks we'll be moving house, into a much bigger place. One of the many upsides to this is that I'll have a spare room to set up a table of my own (huzzah!). One of the (only) downsides is that my desired level of geekery may have to take a backseat to packing and other grown up activities.

All that being said, I thought I'd be a good blogger and keep you all in the loop as to what I'm working on at the moment. It's all unpainted I'm afraid, but it might give you something to look forward to...

So for now, a little update on my current works in progress:

My current goal is to have a "7th edition-friendly" 1000 point list assembled and painted in fairly short order. With that in mind, I've assembled two Tzeentch Heralds on discs (although only one will make the 1000 point list). This will give me the opportunity to play around with the new Malefic Daemonology discipline and try out some summoning. 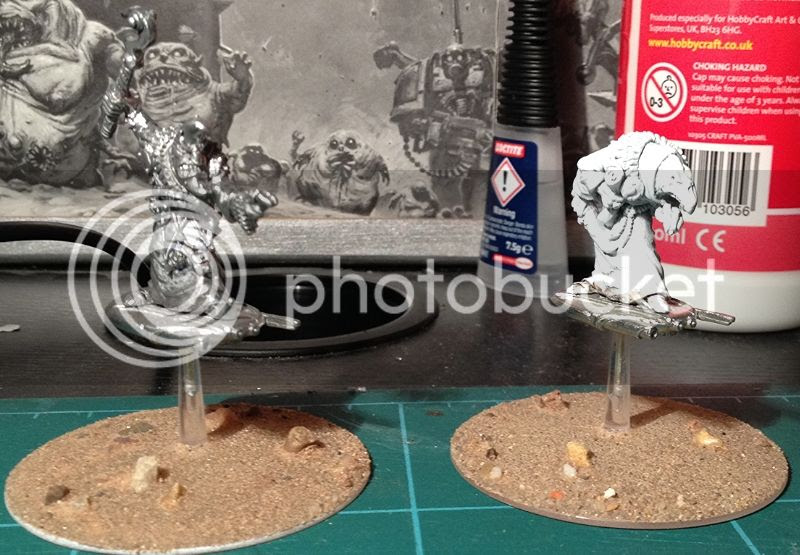 Bit of a shoddy picture, but you get the idea. Both of these guys are built from classic Tzeentch champions on classic discs. I put them on the large flying bases as this is what the current model is supplied with, and I like to keep all of my classic models "game legal".

Next up are eight Screamers of Tzeentch for them to ride with:

I've developed a bit of a liking for Screamers due to their speed and general utility, but we'll see how they work out. These are all made from the incredibly painful to assemble original metal versions.

I've also got a big blob of Daemonettes in the works. I need 18 for my 1000 points list, 10 of which are currently assembled with the remaining eight still needing cleaning: 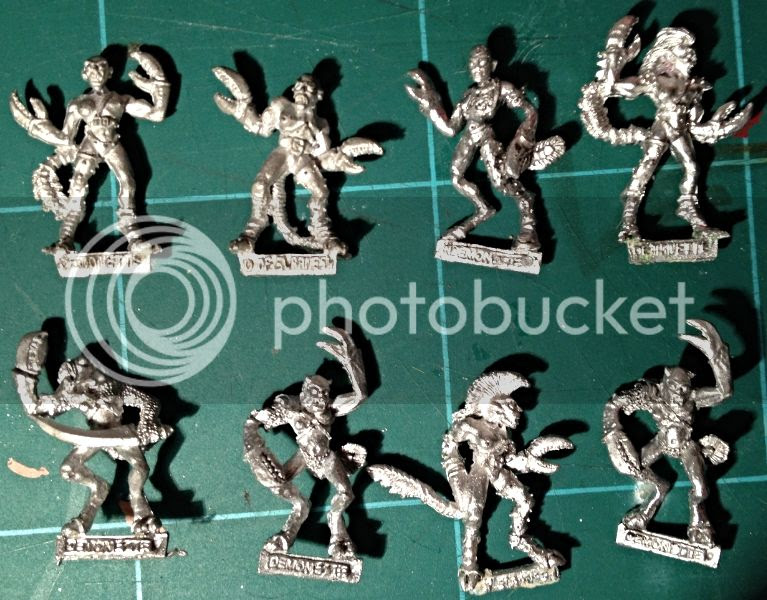 These are the original Realm of Chaos Daemonettes, which are still the best by far (with the Juan Diaz versions coming in second). The one with the mohawk and pointing claw will be used as a champion for the unit. I don't quite have the full set yet; I may search out the rest at some point in the future, but for now I'm satisfied with the mix I've got.

Also to come are two Slaanesh-aligned Soul Grinders, but I'm not quite sure what I'm going to do with them yet.

That's all for now; comments / advice / death threats are welcome as always!
Posted by Ross at 09:00