The Last Stand at Eidolan: Just as planned...

After much planning and mounting excitement, the last stand at Eidolan took place this weekend! After the swirling vortex of the Warpstorm cleared, the nexus remained in the hands of the Imperium...

I'll send you on over to Alex's blog for the full rundown of events, but I shall leave you with a huge picture dump depicting some key moments. A great battle was had, many skulls were taken and many more daemonic footsoldiers sent screaming back to the Warp. We'll see how the story progresses (all according to Tzeentch's plan of course).

Hope you like the pictures guys. Be sure to check out Alex's blog for a more complete write up!
Posted by Ross at 13:45 1 comment:

Well it's taken me a while, but I'm finally getting round to playing my first game of seventh edition 40k. This wont be just any old game however... A fellow blogger and good friend of mine has cooked up something rather special. In the interests of avoiding any copyright infringement suits, I shall link you to his blog post on our forthcoming battle.

My capering daemonic horde, The Stormbringers, will be assaulting the mysterious Temple of Eidolan. This crumbling structure houses the otherworldly nexus of power known as The Bane of Eidolan, rumoured to hold sway over the children of the true gods. Under the baleful eye of their master, the Lord of Change known as Gibberflux Doomcackle, The Stormbringers will attempt to take possession of the temple, and the nexus, for their own nefarious purposes. Perhaps to use against against a rival daemon lord, perhaps to destroy. It may be that only Tzeentch himself knows the true purpose of the nexus, but its power is undeniable.

Below you can see the slavering horde that will be assailing the weakling defenders to bring glory to their masters: 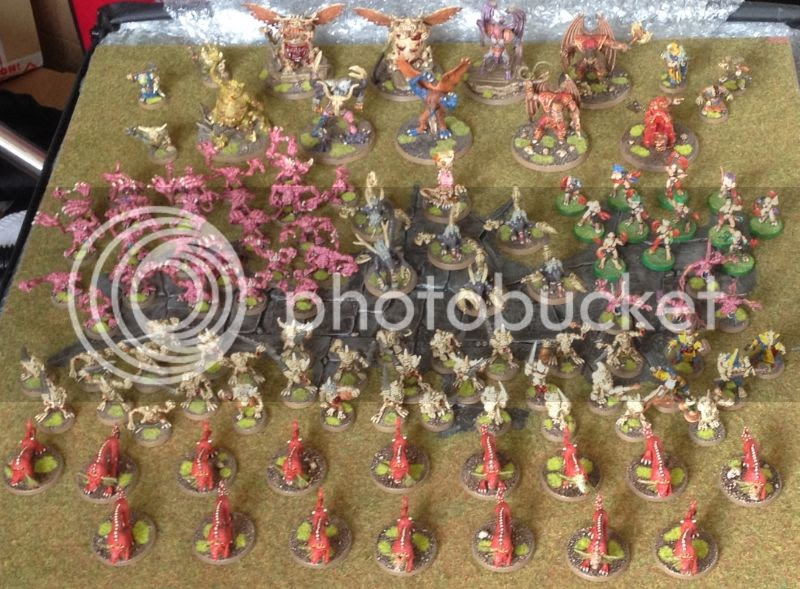 Yes I know they're crappy pictures, and yes I am sorry for that. What you see here is pretty much all the daemons I currently have painted. The only one missing is Scabieathrax, but I thought I'd leave him out in favour of a more balanced scenario (given that the defenders would have literally no hope of killing him before he vomited destruction all over the shop).

I'm really looking forward to playing out this scenario. It's pretty much a narrative affair, which makes a rather nice change from incessantly coming up with meaner and meaner lists to crush my enemies, see them driven before me, and hear the lamentation of their women.

I'm sure a pict feed of the battle will be ordered by the Inquisition, and I'll use trickery and daemonic sorcery to procure a number of images for your enjoyment. Or failing that, we'll both take lots of pictures and post them on our respective blogs...

More when the dust settles!
Posted by Ross at 09:34 No comments:

Another quick update from me tonight. I've made a bit more progress on the Slaanesh Soul Grinder:

You can also see off to the side where I've started building my second Soul Grinder. That one will follow much the same template as this one. I still haven't worked out what I'm going to do with the gun arm... I might just use the autocannon from the Defiler, but I kind of want it to look a little different (and less like a twin-linked autocannon, which it isn't).

Comments welcome!
Posted by Ross at 14:54 No comments:

You probably shouldn't get too used to this daily posting malarkey, but enjoy it while it lasts. Just another quick update tonight; I've made some more progress on the Slaanesh Soul Grinder: 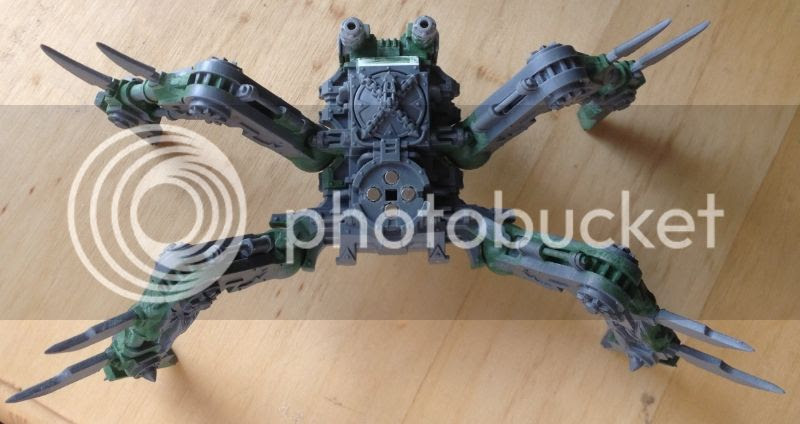 I've done quite a bit of conversion work to this guy. The main chassis has been chopped down to accommodate four legs instead of six. This meant that I had to completely replace the engine parts at the back. Thank you butchered Space Marine Dreadnought, your sacrifice was not in vain. You can see in the picture too where I've magnetised the join where the torso sits. Nearly finished with the legs now, just a few little details to add.

At this point I should probably credit my sources of inspiration. After a great deal of Googling for cool Soul Grinder / Defiler conversions, I stumbled upon this version from Amaximus. This guy's blog was an excellent resource when I was planning this conversion, so thanks to him for that. I also spliced some of his ideas with a bit of inspiration from this one by Mordian7th. Both very cool blogs, so check them out if you haven't already.

Before I go back to assembling this beast, I thought I'd share with you something that amused me yesterday. I was assembling the torso and head bits for the Grinder and I had to create a suitable ball joint to fit into the socket neck of the Maulerfiend's head. I used a bit of moistened green stuff and pressed it into the socket to get the right shape, and this is what came out: 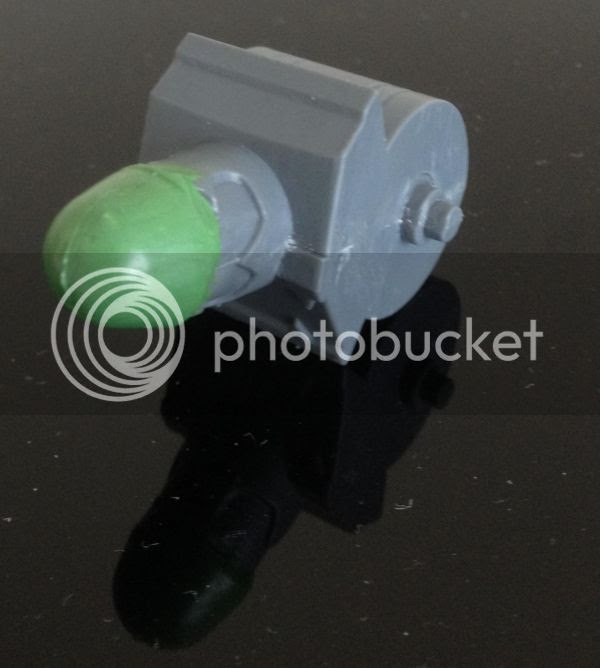 It could just be my puerile mind at work, but I'm sure most of you will agree that this is hilariously phallic. I was expecting a reasonably spherical blob, but instead I was greeted with that. Despite being alone at my desk I couldn't help but laugh out loud...

I'll admit that I've been pretty lax with my blogging of late. That's all down to boring grown-up stuff like moving house, but is something I intend to rectify with (almost) immediate effect...

To that end, here is a little teaser of what I'm working on right now. It's not much I know, but moving house and all that has set me back a little with my painting and modelling schedule.

As promised, a little teaser: 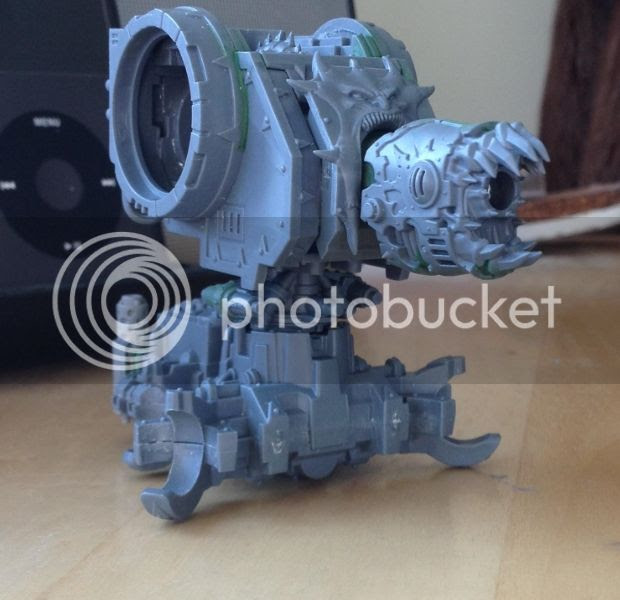 Early stages yet, but I like where it's going. I'm combining the Maulerfiend, Soul Grinder and Defiler kits to come up with something truly gribbly and daemonic. I've magnetised the connector at the "waist" so the torso is detachable for ease of transport.

Comments are very welcome.
Posted by Ross at 16:32 No comments: