Been a while hasn't it? I seem to go for ages between posts these days, but I'm still at least intending to improve that... Anyway, I've got a fairly meagre offering today, but it's all I can muster at the moment. As I haven't done any painting of any sort for a while, I thought it might be an idea to show some WIP projects, since it might spur me on to give them a lick of paint.

First up are my Chaos Pact/Renegades for Blood Bowl. I'm kind of all about Blood Bowl at the moment, despite it being one of the most frustrating (and awesome) games around. I've got my Orcs in a completed state now, so it's time to turn to another team. I wasn't actually planning a Chaos team of any sort, but through a flurry of recent trades (mostly from Edward Gladdis, the enabler) I've managed to end up with one, without having to spend any cash money... 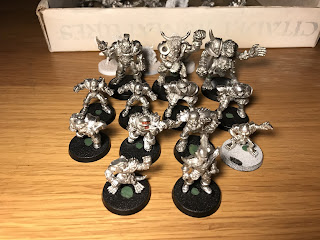 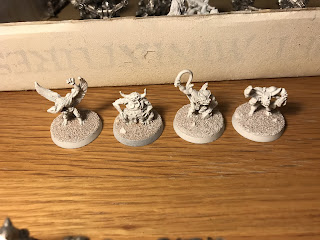 Because I'm an old school sort of fellow, these are all 2nd edition metals. I've got duplicates of the humans, but as they're prone to mutate after a skill roll or two, I'm not too worried since I'll have secondary versions of them for when they do. The familiars will be the Turn/Score/Re-Roll counters for the team. I've got a couple of models laying around that might make a good coach and apothecary too, but I haven't settled on those yet.

Next up is what will become my Necromunda gang. I painted up a load of cultists a couple of years ago, and Necromunda is the perfect reason to add to them. I was going to use the Cawdor heavy stubber in this gang, but he doesn't really fit, so I'm gonna have to come up with something else. 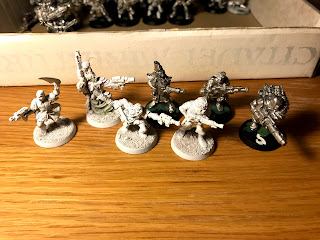 That's it for now. Hopefully I'll have something a bit more colourful to post next time!
Posted by Ross at 03:26 3 comments: