You must gather your party before venturing forth: Adventures in Frostgrave!

Greetings all.
In my quest to post a bit more frequently, I have some WIP stuff to show off, and a little update to go along with it.
Firstly, I'm now one of the ever-growing number of people to have fallen in love with Frostgrave! Very reasonably priced, low entry point, and a ruleset that is easy to pick up while still being difficult to master. It has a very old school D&D vibe to it (hence the title of this post; bonus points for those who get the reference). I've been thinking about it for a while, but I had my first game last night and I'm instantly hooked.
Given my interest in Realm of Chaos era Citadel goodies, it seemed only right to theme my warband in the same way. And so it was that the depraved summoner Sebassis Daemonclaw and his band were born:

Ive gone for a selection of Chaos thugs to fill out the warband, while Sebassis and his apprentice are Chaos sorcerers. The apprentice had the top of his staff chopped off (and saved for another conversion), and replaced with a green stuff orb. I like the subservient pose he's got, but I couldn't have him with a more impressive staff than his master. The rest of the warband are more or less stock, with a little chopping here and there. I think the knight, Vigo the Cruel, is an old Chaos Warrior, but not sure on the range (still Citadel though). He had a slung shield added to his back, so I could match the equipment for his type.
I've got a pretty vast collection of daemonic gribblies to use for summoned creatures or random encounters, but that's for another day...
Comments welcome!
Posted by Ross at 07:13 No comments:

Email ThisBlogThis!Share to TwitterShare to FacebookShare to Pinterest
Labels: Frostgrave

We captured it for Chaos: The whole rotten lot!

Once again I've done that thing where I don't post for ages... I'm planning to get out of that bad habit, even if it means posting a lot more WIP stuff (which might go down well actually, we shall see).

Today I have a few completed bits to show you. I've finally finished off the cultists that I started over a year ago...

The final member of the Brotherhood of Forlorn Hope is their leader, "Flaky" Sal: 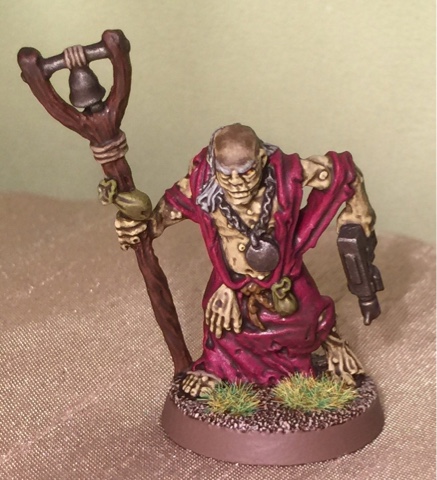 He's built from an old school Jes Goodwin Nurgle champion, with a small amount of conversion work. Firstly I needed him to carry an autopistol, so off came the sword to be replaced with a pistol from the excellent plastic cultist kit.

I also wanted him to be a bit less Nurgle, so removed the mark of Nurgle from his forehead, and did a little green stuff work to make him seem less decayed, but still degenerate.

Here he is leading the cult to glory in the eyes of the true gods:

Painting all these guys was a real grind tbh, but I'm really pleased with how they turned out, both in terms of conversion work, and painting. They'll mostly be used in 40k, but I suspect they'll find their way into a few games of Rogue Trader as generic mutants (or possibly with a backstory of their own actually).

As a reminder, I was originally inspired by this image of Chaos Cultists: 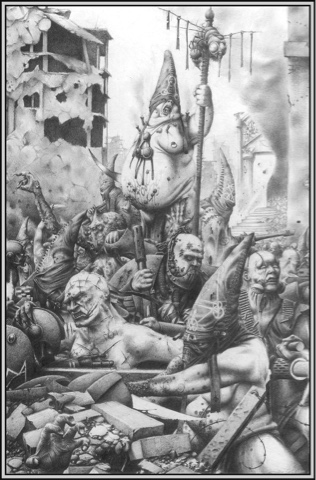 Definitely what they should be like in my opinion.

Comments are most welcome!