Happy Halloween to the lot of you, hope you're doing something suitably spooky. Given that I've been mostly painting undead recently, a Halloween themed post wasn't much of a stretch. I finished off the last of my ghouls for Frostgrave over the weekend: 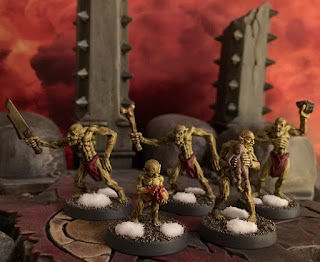 Apologies for the dodgy picture. You'll notice I used the ghoul child and ghoul hag from Heresy (also sculpted by Paul Muller). These two are particularly loathsome and disturbing models, so nice job there Paul! Here they are as one big happy family: 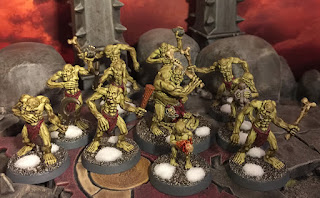 Predictably this has set my mind racing and I'm now considering doing a much bigger ghoul tribe... I've got plenty more on the table first though, so we'll see if that project ever comes to life!
Posted by Ross at 01:40 3 comments:

Hail to the King!

A quick post from me tonight. Been pretty busy lately, but I did manage to find time to put some paint on my Ghoul King for Frostgrave: 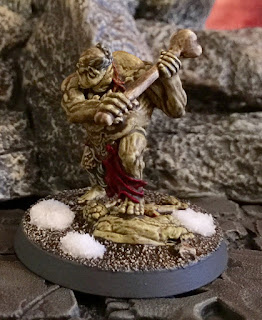 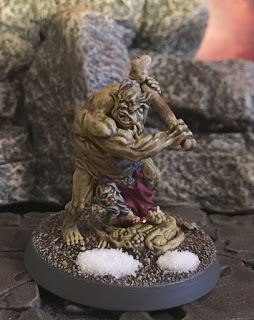 He's another excellent Paul Muller sculpt, this time done for Heresy Miniatures. This is the "vanilla" version of this model. I chose this version (though I do have the special version too) mostly because he has a necklace of bones, which represents an essential plot point in the Lair of the Ghoul King scenario for Frostgrave. As an added bonus, this version covers his dangly bits with a loin cloth, meaning that I didn't have to paint yet another phallus...

Prep work for the Thaw of the Lich Lord campaign continues at a fairly steady pace. This time I've finished off some loathsome ghouls and a troll. The campaign calls for an undead troll for one of the scenarios, but I wanted something I could use again and again, so I went with a more "generic" troll. He'll make a fine undead troll, but can also be used as a wandering snow troll in other scenarios. Onto the pictures: 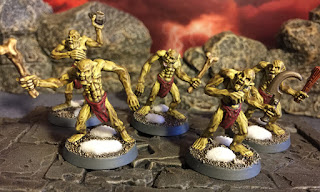 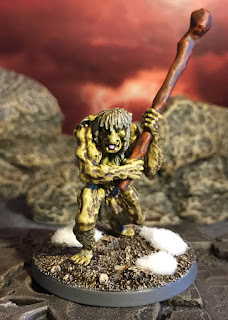 The ghouls are the old GW metal versions, sculpted by the excellent Paul Muller. Definitely my favourite iteration, and I've got some of the ghouls he did for Heresy too, so they'll fit in nicely.

The troll is a very old Citadel Fantasy Tribes troll. I rather liked that he had the look of a proper D&D style troll, and like the werewolf I painted last week, he has his dong out...

That's all for this round. On the table at the moment are another 5 ghouls, and a big fella to lead them...
Posted by Ross at 04:52 4 comments:

I've managed to get more or less back into my painting routine and I've been cracking on. I wanted to work on something super easy because I haven't painted in a while, so out came a couple more monsters for the bestiary, and the rest of my unpainted treasure tokens: 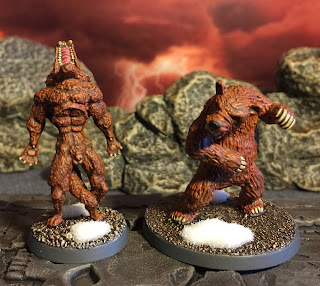 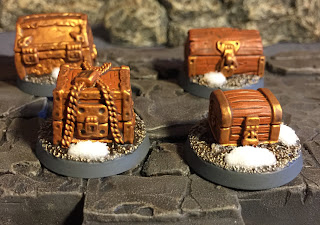 Nothing fancy here, simple paint jobs all round really. The bear and werewolf are fairly interesting models though. The bear is Beorn from Citadel's 80s LOTR range, and the werewolf is another night horror. And yes, he has his dong out (and seems very proud of himself).

Hope you like them! More Frostgrave gribblies coming later this week.
Posted by Ross at 03:38 2 comments:

Email ThisBlogThis!Share to TwitterShare to FacebookShare to Pinterest
Labels: Frostgrave

First up, apologies for the massive delay in posting! It's been a fair while since I've had the chance to paint, let alone take pictures and write about it. I got married a couple weeks ago, and so the preceeding few weeks were ALL wedding ALL the time! We had a fantastic day though, so it was all worth it in the end: 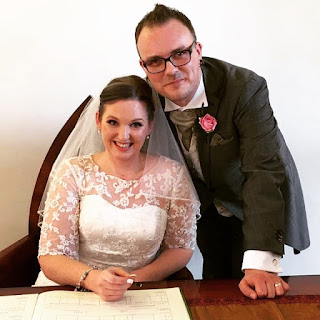 Now that the wedding is over, and I'm back to reality, I've managed to squeeze in a little geek time! I've done a little painting that I'll take some pics of over the next few days, but firstly a mini battle report!

So my Brother-in-Lead Alex and I have been playing through the (excellent) Dark Alchemy campaign for Frostgrave. It's been a rather nice change of pace for us actually, since it's played cooperatively. So it came to pass that our respective wizards made an uneasy alliance, and advanced into an abandoned alchemical factory to discover the secrets (and horrors) within.


We bashed through the first couple scenarios in one evening, but sadly didn't take any pictures (between lack of time and fading light, it just wasn't possible). I did however manage to take a few snaps of the final scenario, The Spreading Flames.

By this point in the campaign, our brave wizards have dispatched the foul Alchemical Monstrosity that made its home in the ruins of the factory, as well as outrun the shambling hordes of burning skeletons blocking their path. We're now in what remains of the main factory floor, looking to grab what loot we can and get out before the vats of volatile chemicals ignite and bring our adventuring careers to a swift end. Unfortunately, this section of the factory is where the semi-sentient war machines known as Fire Flingers were produced, and they're not about to let us escape so easily.

The scenario calls for some medium sized fire-flinging constructs, so Alex's Tick Tock Men stepped up to the plate. He also made some rather excellent fire markers that you can see in the pictures below. 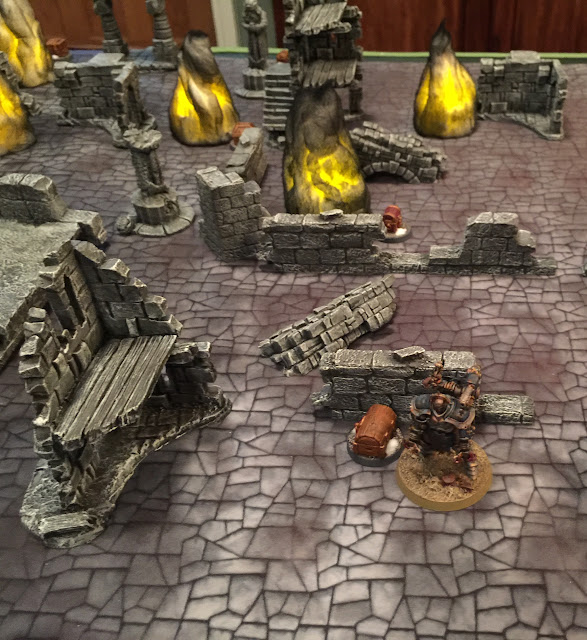 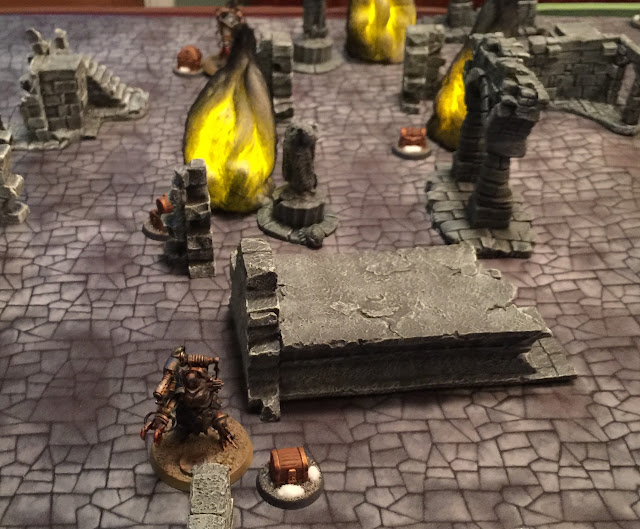 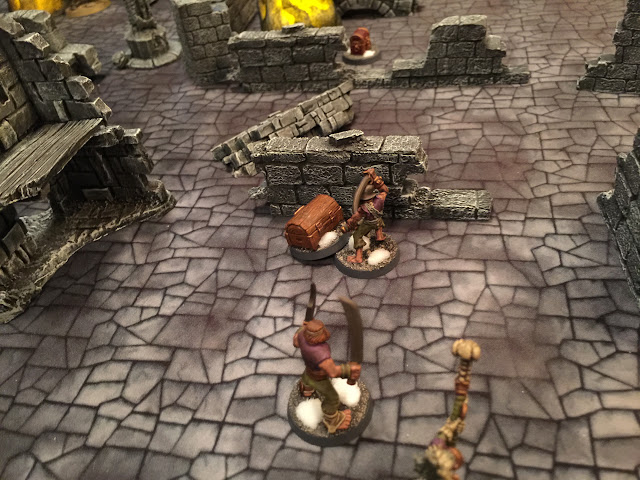 Our warbands each took a flank and advanced cautiously. Alex's wizard had been badly wounded by a sneaky skeleton in the previous scenario, so he took some time to heal up before advancing further. My plan was to go straight for the nearest treasure and dispatch its clockwork guardian swiftly. This didn't quite go to plan however, and one of my treasure hunters was doused in chemical flames before the monstrosity fell. Fortunately for me, the (now somewhat crispy) treasure hunter survived to make off with the shinies. Alex had managed to secure a couple of treasures on his side, whilst also destroying a Tick Tock man. 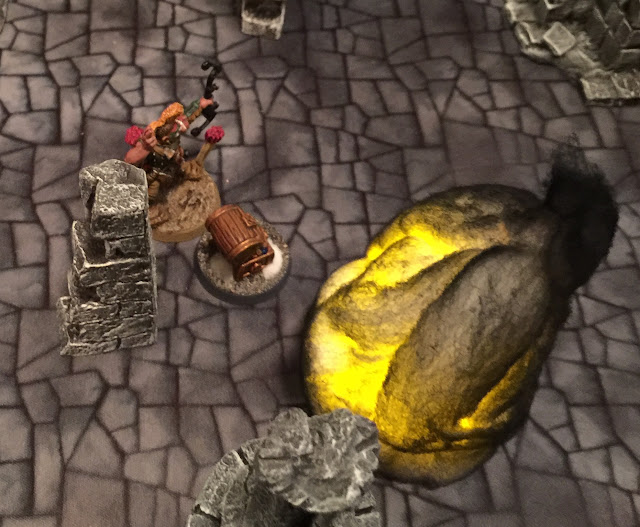 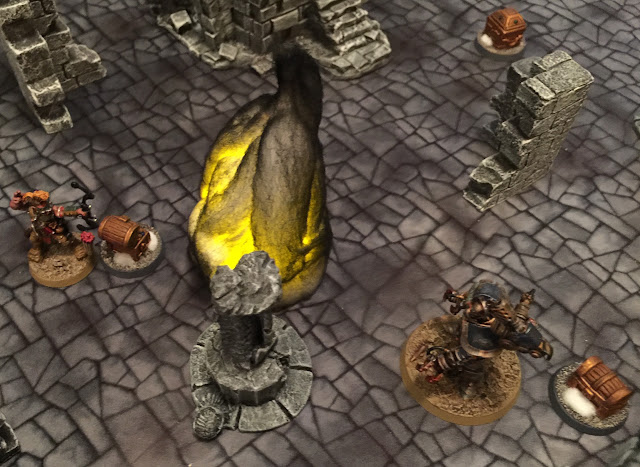 We both continued to move through the flaming warehouse with our wizards, using Elemental Bolts and Bone Darts to down the remaining two Tick Tock men, nabbing treasure as we did so.

It was at this point that we decided we should make the game a little more interesting. All the constructs had been destroyed, so it was just a matter of gathering up the treasure and getting out in time, which didn't make for much of a challenge. So we decided another two guardians would enter through the doorway to attack our warbands. 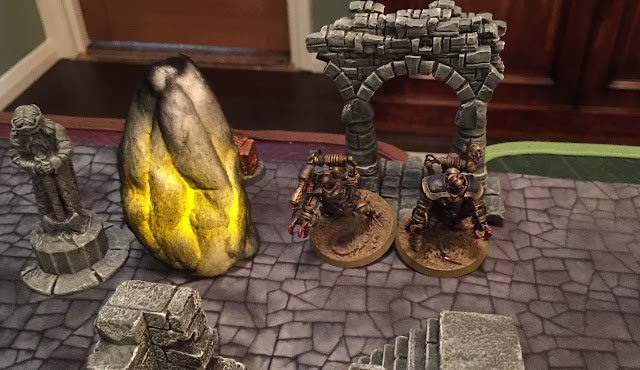 Unfortunately, both of the Tick Tock men advanced on Alex's wizard, preventing him from grabbing some loot, and forcing him to make a fighting withdrawal. 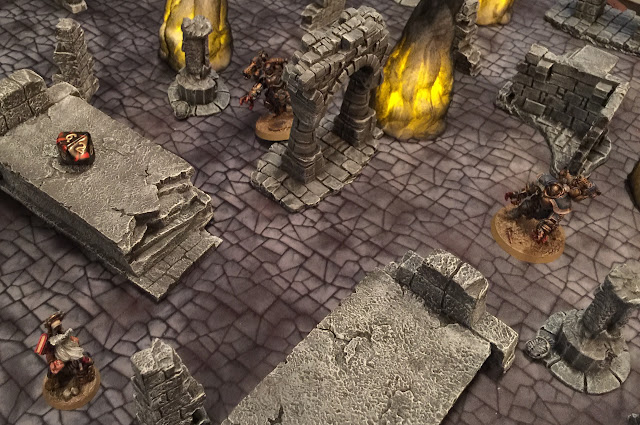 This situation worked to my advantage though, and Scabrous Vile was left to pluck some treasure from the flames and make off with it before the warehouse came down around him. 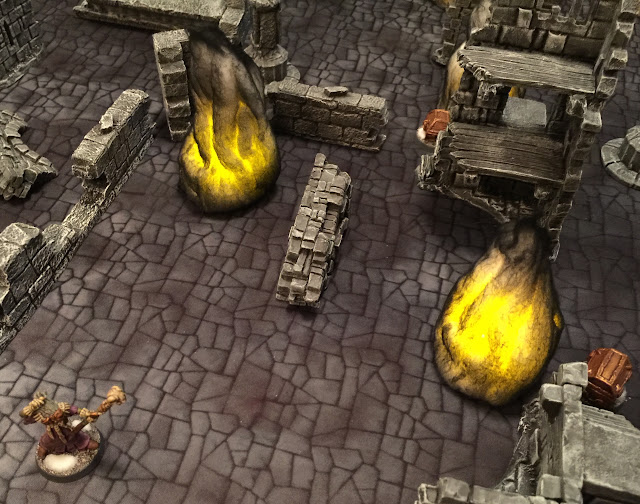 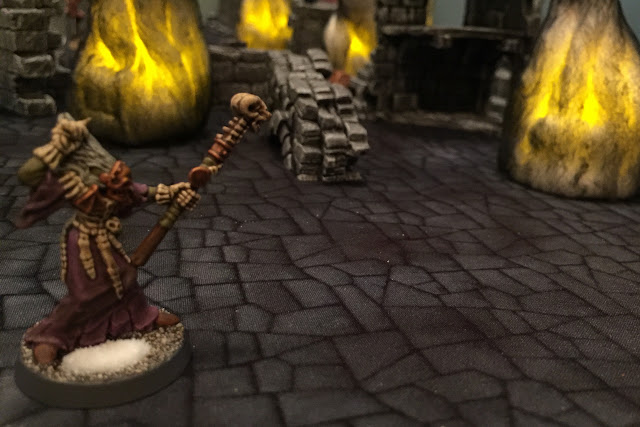 What a campaign! I highly recommend this to anyone who enjoys a trip to the frozen city, particularly as the co-op nature of it is a nice change of pace from the usual.

We'll be cracking on with the Thaw of the Lich Lord next, and it's going to be a little odd going back to trying to kill each other!
Posted by Ross at 08:18 6 comments: