Back in the saddle

Been a while again hasn't it? I've just had zero motivation and not much time to do any painting for a long while now. Well I decided to rectify that recently, sort of. In an effort to force myself to do a bit of painting and remember that I actually enjoy it, I picked up something very simple to ease myself back into it.

I've had these Plaguebearers sitting around for a long time now. They're actually my "leftovers" from doing my two big units of 30, and they were in various states of disrepair. Some were missing arms or weapons (or toes in one case...), but with a bit of ingenuity I managed to cobble together two serviceable units of five. At some point these will be useful for summoning in AoS, but for now they just serve as a handy way to get me back to painting. 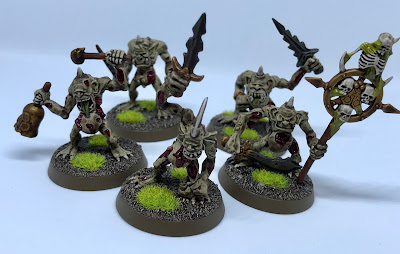 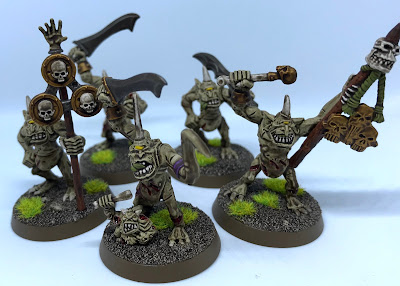 They're nothing glamorous but they did turn out ok. I mixed in a few more modern bits that I found in my bits box too.

I have to say though, this year hasn't been a total wash in terms of hobby time, as I have played a fair few games of my new favourite game ever: Blood Bowl! I ran my Orcs in a local league, losing most of my games, but winning best painted and generally having a great time. I was intending to paint a new team for next season, but that didn't quite work out. They're still on the table though and I'll get them done for the one after...maybe.

Anyway, that's it from me for now. Hopefully I won't leave it quite as long next time!
Posted by Ross at 02:15 No comments: