Just to let you know that the name of my little blog has now changed to "Classic Chaos Daemons". Lead Rising was a clever name and all, but it doesn't tell you much about what this blog is all about. All the content will be the same of course, just under a new title.
My twitter handle is (for the moment) @ChaosDaemons. I'm not convinced that I'll stick with it, or even with twitter at the moment as I'm not really a fan. That's what it is for now though.
I'm off on hols for a couple weeks now, but when I return I'll be putting in a lot more time and effort to make this blog something a bit special (including a vast amount of assembly and painting).

Mastering the digital age with some shameless self-promotion... 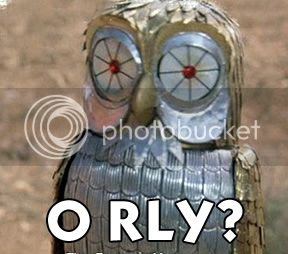 Just a quick post from me to let you know that you can now follow Lead Rising on Twitter (@LeadRising). In my efforts to get this blog noticed by a wider audience, I'll be tweeting when I post updates. For any of you who use Twitter, please retweet and follow at your leisure.

In other news, a good mate of mine from my local club has started his own blog. He's been working on a frankly awesome Praetorian IG/AM army for a little while, so check out his progress at Lead Balloony.

Let this be your last battlefield: 40k terrain

It occurred to me that I haven't yet posted any pictures of my terrain. This post will rectify that oversight...

I actually painted all of this a couple of years ago. Since then I'm sad to say that it has mostly just been sitting in boxes on top of my wardrobe, as there isn't a great deal of space to make use of it in my pokey little flat. I'm pleased to say that the missus and I will be moving to a bigger place within a month - a place with a guest game room. This will give me plenty of opportunity to update and, most importantly, use my terrain and board.

Without further ado, some pictures:


I'm really looking forward to getting some more games in on this board. Before that happens though, I need to update my terrain to bring it more in line with suitable 40k terrain. The first thing to be fixed is the woeful lack of Line of Sight blocking terrain. I've got a few things planned to rectify this, so look out for those in the future.

I was tempted to go with the standard 40k ruins for most of the board, but as I already had this little lot painted up, I thought it might be a good opportunity to go for more of a "Chaos Wastes" kind of vibe. I've picked up some GW woods and a bunch of rocky outcrops, plus a few bits of scatter terrain. I'm really looking forward to getting back on with this project when we're in the new place. Look out for WIP pics in some future posts.

In my efforts to post a little more often, I thought I might provide some insight into my current army selection now that 40k seventh has dropped.

I'm starting off with just 1000 points this time, partly to get my head around the nuances of the new rules and partly so I have a chance of having a fully painted army again.

These guys ride with the Screamers. They'll both roll on Malefic, hoping for at least one Cursed Earth so I can have a good sized bubble of protection.

These guys are here to generate warp charge and provide backfield OS scoring. They'll also do a bit of summoning if I have enough charge.

Bodyguard for the Heralds, and tank munchers.

The real heavy hitters. They'll run alongside the Screamers and Heralds to benefit from Cursed Earth.

There's not much to it I realise, but it's a start and it'll get me used to playing with the seventh edition rules. Models-wise, I'm currently working on the Heralds and the Screamers, and I have a little something planned for the Grinders.

It's been far too long since I've posted (again)... I've resolved to make more of an effort to post more often instead of letting it slide. Today, I'm pleased to report that I have an update for you!

I was off work the other day, so what better time to finish off the last of my Pink Horrors? Of course these aren't the last of my Horrors, but if I fool myself into thinking that they are then I'll feel a little better... Thanks to the introduction of Malefic Daemonology (summoning) in seventh edition 40k, it looks like I'll be painting at least another unit of two. I'll worry about that in the future though.

For now, here are the final five Horrors from the second edition unit: 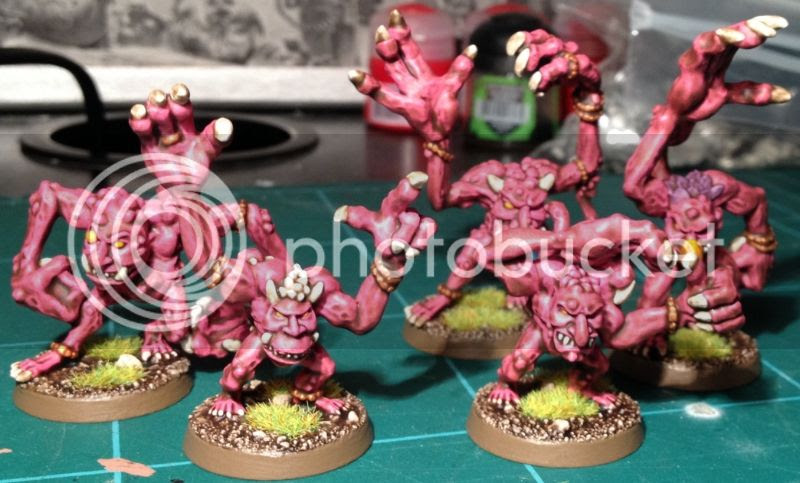 Not the greatest picture I know... Think I might have to work on that in the future. I also put together a couple champions (one for each unit). For those of you that play 40k, this is to mitigate against a bad result on the Warpstorm table (number three I think). For the second edition unit, this was easy enough as each of the lesser daemons had a full command group produced at the time. For the first edition gribblies I had to get a bit more creative, so I cobbled together a little conversion. I gave him a third arm to mirror the second edition champion somewhat, but otherwise it's just your standard Horror. 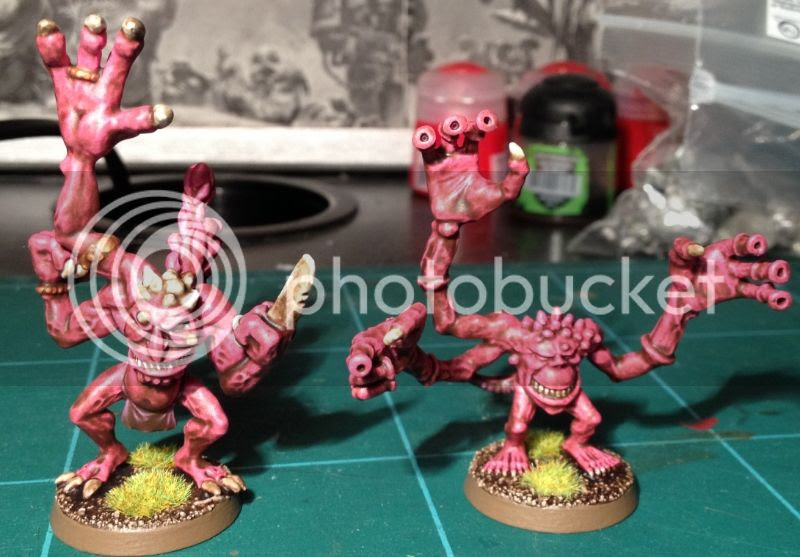 Finally, here's the second edition group all together:

Comments are welcome of course!
Posted by Ross at 03:38 No comments: