You must gather your party before venturing forth: More Frostgrave soldiers!

Welcome to my final post of 2016 (probably)! I'll post some sort of hobby retrospective at some point over the next week, as it's been an interesting and eventful year for me, both hobby-wise and in real life. First though, the last three models on my "2016: to paint" list are done. They are of course more Frostgrave minions, this time a Marksman and two Rangers: 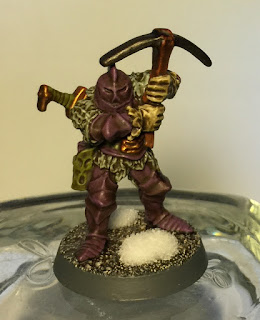 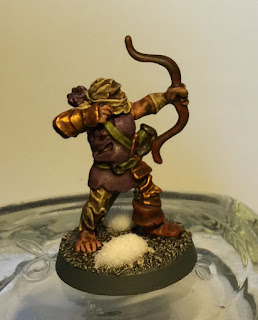 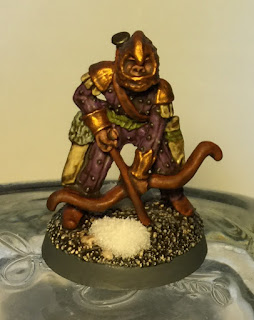 Still sticking to my old school Chaos theme (of course), these three are made up of two Chaos thugs, and a really old preslotta Chaos fighter.

That more or less rounds out my Frostgrave warband for the meantime, although there will no doubt be further additions as we progress through the various campaigns. I've got plans for a few different projects over the next few months, but more on that next time!
Posted by Ross at 01:10 4 comments:

Do not call up that which you cannot put down: Part Two

Just enough time to squeeze in another post or two before the end of the year right? Well here's one!

I've been powering through the last of my "to paint" list, and I'm actually almost at the end. Three more off that list are these fine fellows, more daemons (demons) for Frostgrave: 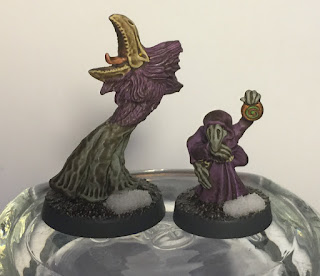 A minor demon and another imp, made from an old Tzeentch flamer and a familiar. 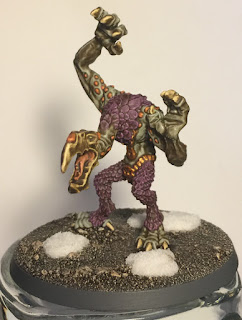 This time it's an old Lord of Change, minus the wings (because Frostgrave). I painted them all in the same scheme as my other demons and my warband, to tie them all together.

There goes the painting schedule...

Well firstly, some fantastic news: the wife and I are expecting our first baby! It's early days yet (what you might call "WIP"), but we're looking at a summer baby. Both mum and baby are healthy, so I'm happy! I'm sure I'll share some pictures of my greatest miniature as it develops... But that's enough of being grown up for today, back to toy soldiers!

I reckon I can squeeze in one or two more posts before the end of the year, and as I sit here watching the new series of Time Commanders (seriously, watch it!), it seems like the right time to crank out a little post.

I've managed to get a fair bit of painting done recently, just trying to round off the year, and clear my current backlog a little. First up, I painted a pair of old school plastic beastmen: 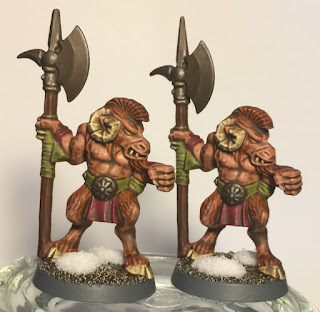 These two are basically "understudies", fulfilling a variety of roles. Mostly fighting in the frozen city, they'll be serving as rangifers, foulhorns, or possibly even gnolls, depending on where they're needed. Despite being a pretty simple sculpt, they were a pleasure to paint, and actually turned out rather nicely.

Another beastie painted up for Frostgrave was this rather lovely Minotaur: 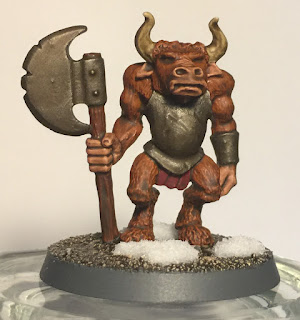 Pretty simple to paint up, nothing too fancy going on. I kind of like his whole expression and demeanour though. He looks like he's been given a simple job to do ("stand here and guard this chest"), and that's now the most important thing in his world.

Next up, and also for Frostgrave, are another bunch of vile daemons (or demons, if you prefer): 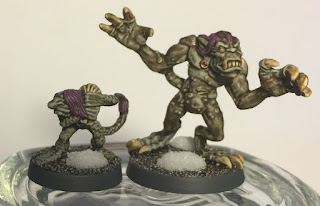 These two rotten bastards will serve as an imp and a minor demon. Yet another Chaos familiar added to my collection, along with a harpy/fury.

Lastly, but by no means leastly, a major demon. Well, sort of... 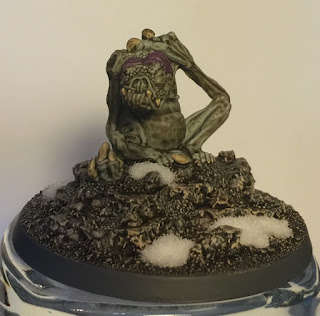 I was planning to use this old Citadel Chaos demon as a major demon for Frostgrave, but even mounted on a big scenic base, he just didn't seem imposing enough. Part of this is due to the pose (he is sitting down after all), but I just wasn't happy when I compared him to my other major demon (classic Keeper of Secrets). I decided to paint him up anyway, because he's a fantastic model, and incredibly sinister looking. He'll probably still find his way onto the battlefield, either as a wandering monster, or possibly something scenario specific. Not sure yet, but he certainly is cool, and that's what matters right?

That's all from me for now, but I've still got a few more bits on the go that I want to get finished before the end of the year. In the meantime, comments are very welcome!
Posted by Ross at 15:30 8 comments:

Two posts in as many days might just be a record. It's a bit of a cheat though, as I don't actually have anything new to show. What I do want to mention (briefly) is another mad little side project that I've decided to embark upon, following the completion of my Elementals. This time I've gone to the other end of the scale... familiars are the new cool thing for me!

I actually have quite a few already painted, with several more in the leadpile, so I'm well on my way with the project already. They're based a little differently from each other because they've been used for anything from 40k to Frostgrave.

I'll pick up this project now and again when I fancy something easy and fun to paint. They're so tiny that they're not exactly taxing, but they really are a joy to put paint on. You can definitely tell that the sculptors were given pretty much free reign when it came to these little guys. Watch this space for more over the coming weeks!
Posted by Ross at 15:03 2 comments:

Email ThisBlogThis!Share to TwitterShare to FacebookShare to Pinterest
Labels: Familiars

I've reached a kind of mini milestone today, in that I've finished my C34 Elementals at last! I've been putting it off for ages, mostly because I don't like the last one in the set (Life Elemental) and I didn't want to paint her. But paint her I did: 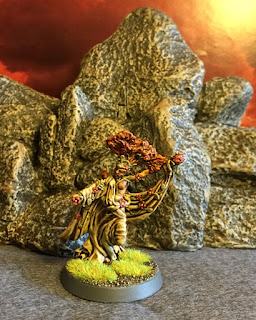 I didn't enjoy this one, and I'm not overly happy with the end product, but she is finished, and the collection is complete! 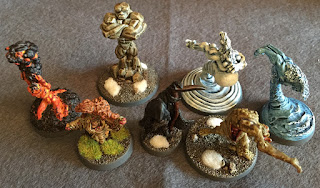 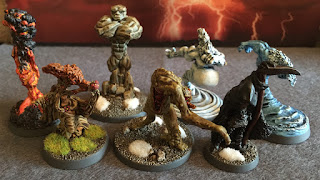 That's a little project done and dusted before the end of the year, so I'm happy! A few more bits for Frostgrave still to finish, and then it's on to Blood Bowl!
Posted by Ross at 03:37 6 comments:

Email ThisBlogThis!Share to TwitterShare to FacebookShare to Pinterest
Labels: Elementals

Got a little something special for you today. This model isn't part of any of my current projects, but as soon as I saw him up for sale on Facebook, I knew I had to have him! From what I understand, he was due to be part of the Pantheon of Chaos project, but the scale was a little off compared to the rest of the range. Because he is just so damn cool, Diego decided to offer him up for sale anyway. Without further ado, I present to you the Time Traveller: 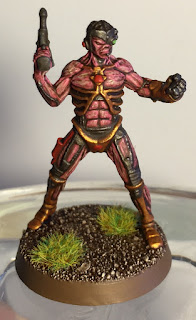 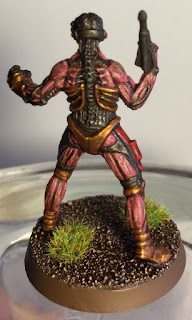 Quite clearly he is a (pretty faithful) rendition of Eddie from the cover of Somewhere in Time. Being a big fan of Maiden, I knew I had to have him. I stuck pretty closely to the colours on the album cover, and I'm pretty happy with how he turned out! 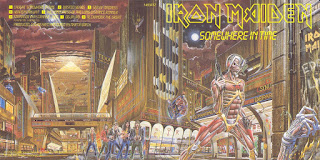 I always try to find a gaming purpose for my models, but I'm not sure where Eddie will pop up just yet. Between 40k, Rogue Trader, and the upcoming Rogue Stars, I'm pretty spoilt for choice though!
Posted by Ross at 07:38 5 comments:

It's worse than that, he's dead Jim

Another pretty quick post for you today, mainly because there isn't too much to say! I'm working through my current paint list so I can get cracking on a new (very old) Blood Bowl team, now that that's a thing again.

My brother-in-lead Alex recently painted up some casualty markers for the Hunt for the Golem campaign. Although we have plenty now, I had a couple laying around that I had been meaning to do, so I did them: 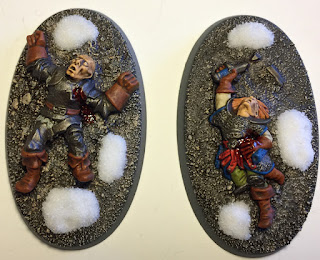 Both are old Citadel figures (not Marauder, as I first thought) one is a dark elf and one is a chaos thug. Both were converted slightly and given a quick lick of paint.