We captured it for Chaos: Revisiting my Chaos Cult

A bit of a departure from my recent stuff this time, I decided to revisit my cultists from a while back. In my 1850 list for 40k I had 5 points to spare, so these lads managed to get themselves a flamer. They'll probably all be dead before they get chance to use it, but it makes them feel important and scary, and that's what really counts. 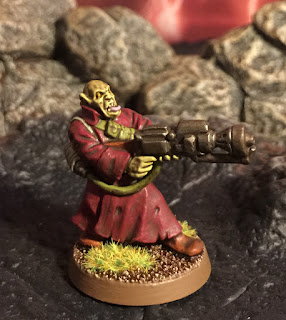 He's a pretty straightforward conversion of a Valhallan with a flamer. All I did was chop off and drill out the head, replacing it with a ghoul head to make him seem much more of an unsavoury character. I also distressed his greatcoat a little, and filed down any Imperial iconography.

Hope you like him. I'll be going back to Frostgrave for a bit, then probably working on some Nurgle daemons, and the last of my Elementals. Till next time!
Posted by Ross at 02:38